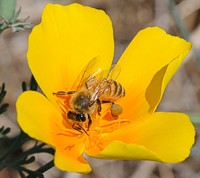 Let's take a walk in the garden and, while at peace with nature, let's see and observe as to what is actually going on. It is early morning in Spring. The air is crisp and cool and the frost on the lawn has been replaced by crystal sparkling dewdrops. There are two wagtails gathering morning breakfast to feed the twins in the hedge nest. The air is calm and still, and the tune of nature's orchestra of cooing doves is backed by the gentle humming of bees. They are everywhere on the bottlebrush, the nasturtiums along the lavender border and digging in the poppy flowers. They are the gentle ladies of God's most important creation. They are the supporters of mankind.

Professor Albert Einstein, a well renowned beekeeper did extensive research on bees and his concluding papers stressed the fact that should bees become extinct, mankind will only survive three to five years and will die of starvation.

Archeological records show pictures of bees and very primitive ways of keeping bees and gathering honey around 5000 BC. Clay pots and jars were discovered in ancient tombs of the Pharos containing granulated honey believed to have been thousands of years old, and so they have been around for a very long time. Records trace their creation to have been in the area known to us today as the Middle East. From there they spread eastwards to China, and southwards down Africa to as far south as our Western Cape coast. They were conveyed in early day sailing ships to Britain, North America, Australia and New Zealand, countries that do not have indigenous bees. They migrated from North America to South America.

Over a long period of time, the climate and altitude of areas of the world to where the original bees were relocated have slightly changed their basic conformation of the original species. There is a theory that the bees that were relocated to the colder and wetter countries have rendered the species calm, docile and less productive as the bees that naturally migrated down Africa to where we are today. Our strain of bee Apis Mellifera scutellta the barer of sweet goods is the most vicious of all world located bees and rightfully has been conned the name "killer bees."

So let's get back to those busy "killer bees" in our garden. They are going about their business gathering pollen and nectar for their hive. They are all not from the same hive, some perhaps as far a field as three kilometers away and others from just down the road. Our little lady flies from poppy to poppy gathering poppy pollen. On this same trip she will not fly to another type of flower and mix the pollen of that flower with that of the poppy pollen. To the hive she goes with her pollen baskets on her back legs plastered heavy with pollen. She will not overload as she will make another ten to fifteen flights that same day depending how far she is from her hive.

She arrives at the hive entrance to be confronted by the guard bees. They briefly check and with the load of pollen she is most welcome, so in she proceeds. All around the entrance and immediately inside the entrance of the hive the house bees have provided a carpet of propolis over which the entering bees first walk which disinfects their feet as they enter into the dark area interior of the hive and to the area where the pollen is being stored. She reverses her legs into a cell where she or other bees have deposited poppy pollen. Poppy pollen and perhaps nasturtium pollen that could be coming
into the hive at the same time on other bees will not be placed in the same cell but each type into a separate cells for that particular type of pollen. The pollen filled cell is capped with a thin layer of honey to which the bees have added an enzyme from their metabolic systems as an add preservative. She then takes up enough honey to give her sufficient energy to make the next trip to the same poppies as before to gather more poppy pollen. Pollen is the protein mixed with honey that feeds the occupants of the hive especially the young larva and developing young bees and Spring is the time when Mother Nature puts out the flowers and trees that secret pollen profusely.

Likewise her sisters of the same hive will simultaneously be gathering pollen of other sources and when the poppy pollen supply is exhausted, she will switch to another flower of different pollen type, perhaps even on the same day. As the hive needs pollen so the bees during that time will search for pollen. As the early spring extends to late spring and early summer nectar is secreted by flowers of that time of the season and our dear lady now gathers nectar. She gathers from the same flowers on the same flight and does not mix nectar from one flower source with that of another type of flower. This nectar is transported in her second stomach, which is not part of her metabolism system. She crash lands with her load on the entrance board of the hive and after a brief checking she is most welcome and is allowed to enter. She regurgitates her nectar to a house bee who in turn passes it to another and to another and then placed into cells as a thin watery liquid. During the night the workers nurses, and house bees drive off the excess moisture of the stored liquid by fanning until the viscosity of the liquid is reduced to less than 20% water by volume. The liquid is passed from one bee to another by continual regurgitation and enzymes from the bees are added to produce the end product... honey.

The honey is stored in cells in the honey storage areas of the hive that forms the honey combs as known to us. The cells are topped up and further enzymes are added to the surface of the honey in the cell and the cell is then capped with wax. This honey immediately under the caps is prized to be of high medicinal value. It is this honey combined with a snatch of pollen taken every so often when desired by the beekeeper that prolongs longevity among beekeepers sending them all well into their late nineties...  free of charge !!!